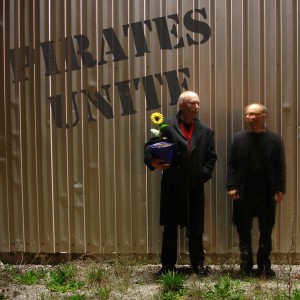 The song isn’t really for (or against) file sharing, but it’s definitely against the music industry.
– Maybe we are at a crossroads. We can either leave music making to artists who are satisfied by making money playing live, or we can find new ways to get paid for recorded music. Most probably a combination of both. But you can hardly make as much money on recorded music in the future as you can today. It will be the end of the million selling artists, says Oh la la! and continues:
– Sure you can understand the big record companies frustration. The music has found its way back to its “invisible” origin, its transcendent form. It’s floating there, in front of the record company executives, and they can’t put a price tag on it. Of course they get angry!

Music business is all about business and not at all about music. But what is musicians supposed to do for a living then?
– Well, they’ll have to do what musicians have done in all times to support themselves: play. At parties, festivals, celebrations, concerts etc. And what’s so terrible with that?