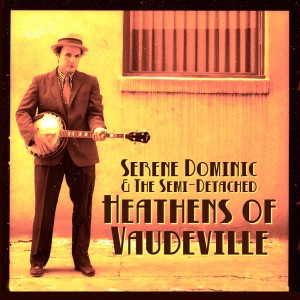 Sleeve design by Serene Dominic and Stefan Wesley with a little help from Magnus Häglund.

Liner notes:
Can it really be 11 years since “Heathens of Vaudeville” was released? Gosh, it really only seems like 10. In 1996, everyone seemed convinced that the end of the century and the end of days weren’t mutually exclusive. Turns out the world only ended for loser bands that grunge pushed off the radio. And later still, loser grunge bands. When we were recording this album, using the word “rock” in the vicinity of “roll” was verboten in indie circles but we went ahead and made a rock and roll record anyway, with some Hal Kemp thrown in. This expanded “Heathens” provides a lovely snapshot of the Semi-Detached as well as Huge Spaceship, my other side project which only ever played ten songs live, three of which are on here. For more details, lyrics and individual song minutia, visit serenedominic.com and knock yourself out.

This version has seven more tracks than the original released on Worrybird on April 15, 1996, including two WorryBird singles and two outtakes that are now intakes. Thanks for buying those if you did and this one, too. And thanks for everybody who worked on this release and the Bendi brothers. All the best and whatever you do, don’t lay that Stetson on top of the bed!