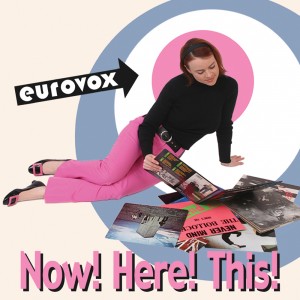 Eurovox’s lush interpretation of the Brit pop sound contains stout infusions of Mod and pop punk, balancing melody, energy and attitude into a hip sound that stands as the peak of the nu indie sound while at the same time setting itself apart as something special and unique. Here is a truly distinct voice in today’s rock scene.

Eurovox’s debut CD “This is … Eurovox” was declared one of 2005’s top releases in a vote by Get Out Magazine/Tribue newspapers. The print and online media were effusive in their support of the music – in fact, Mod Radio UK lavished praise via a track-by-track analysis. (The band has this point to make: “Let the music speak for itself!”) Eurovox has opened for such leading artists as Supergrass, Shiny Toy Guns and The Vacations and also put in an appearance at the 2005 Freedom Festival in Seattle.

Eurovox is always putting its sweat and labor into the band’s music. The group recently completed its much-anticipated sophomore effort, “Now! Here! This!” . The new disc features ten new handcrafted eurovox songs and a surprise cover track. Prior to the official release tracks one and two, Underground sound/Victoria, started recieving airplay with several additional songs getting attention soon after. Every cut on the CD provides the listener with another audio window into the world of Eurovox.

There has been a sweep of sound on the radio lately looking back to classic sounds; paramount among purveyors is Eurovox. “This is a return to roots, back to when I was a kid growing up in the streets of London and the Southeast England,” says band member Mat Hammond. Bandmate Jiv Tellez also exudes such enthusiasm. “Basically, I’m an Anglophile. I love the 70s Brit movement and, of course, the original Mod scene.” Eurovox member Stiv Flores shares the nostalgia. “Music brings back memories of the good and bad times, giving me a direction for the future.” And while Eurovox’s music is a hearkening back to rock glory days, it’s music reflects that future-thinking drive; the band has captured a classic flavor and reinterpreted it in a fresh, new way.

This nostalgic power and hope for music’s future provides ample fuel for Eurovox’s songwriting force. “Music lets me express myself no holds barred,” says Tellez. “A Eurovox song gives people three minutes to get into our lives and return the favor.” Beyond the strength of love and memory, Hammond says he and his bandmates find muse food in the beyond that is existence. “I’m inspired by everything and anything and even nothing.” Flores puts it simply: “Be true to yourself and play what you believe in and enjoy.”

Review
“In the recent wave of bands recapturing the glory days of the modern era of rock, Eurovox stands among the best and brightest.” – A&R Select