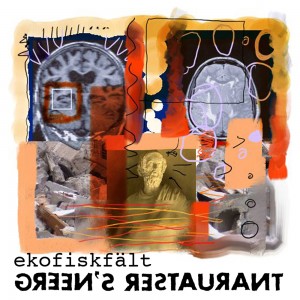 Liner notes:
In the middle of the 80’s I became really interested industrial and experimental music after listening to Swedish punk/industrial band The Leather Nun’s EP Slow Death on the radio, and thus discovering acts like Monte Gazzazza, Throbbing Gristle a.o. Soon I realised the actual existence of a small and obscure Swedish industrial scene, mainly centered around a couple of cassette labels releasing tapes with dark and mysterious sleeves (very appealing to a 16 year old like me!). I ordered a compilation called Unveiled to get the hang of it, and fell in love with many of the contributions. But the best track of them all was definitely Stures Självmord, by Green’s Restaurant.

It didn’t sound industrial at all, not according to what I knew anyway, but very strange and kind of sea sick, as if someone had been jerking around with the tape speed button when it was recorded. The surreal impressions of the music and dreamlike lyrics were augmented by a bizarre collage in the small booklet (all the bands got two pages of self presentation), with a headline saying “When I ate a toaster”. Who was this lunatic? I had to know, so I started a snail mail correspondence (remember, this was way back in the 80’s… no Internet whatsoever!) with Patrik Markusson, the main character of Green’s Restaurant. I interviewed him for my fanzine, bought all of his tapes and even ended up releasing one myself on my short lived label WSOA Tapes.

So, what about the music? Well, imagine extremely intricate sound collages, consisting of snippets of pop songs, minimalist organ drone, alien nursery rhymes, faked radio shows and Dadaistic poetry. Like a conifer version of The Faust Tapes, or a chance meeting of Flossie & The Unicorns, Tangerine Dream and Negativland on a foggy field somewhere in the middle of Sweden.

In the beginning of the 90’s the style had changed to more sequencer based sounds, and thus losing a great deal of the former charm. About the same time I lost contact with Patrik; he lived in Gävle, mid Sweden, and I in Lund, which is in the south, so there was a distance of about a 1000 kilometres. We never met in those early days (although I distinctly remember him actually phoning me on one occasion, when I still lived at my parents’ place), but in 2001 I decided to locate him, and it turned out that we both had lived in the same city (Malmö) for at least five years. At one point we actually lived on the same street, not knowing of each other. By now he’s one of my closest friends, and there was never a shadow of a doubt when Stefan of Bendi Records asked me to check out what Patrik was doing nowadays; maybe there was some new Green’s Restaurant material lying around? No not exactly (even though Patrik says that Green’s Restaurant kind of still exists), but now there finally was a chance to re-release his undoubtedly best effort: Ekofiskfält. And here it is! With almost 40 minutes of extra material, consisting of original sessions and other unreleased related stuff.

Listen very carefully to these fantastic and highly personal songs and sounds, allow yourself to be swept away by the dreamy atmospheres and surroundings. Ekofiskfält is one of a kind, and definitely one of my favourite recordings of all time. I doubt that my own music would sound anything like it does if I hadn’t discovered this fantastic cassette in 1987.