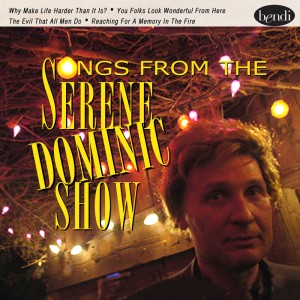 Tracks:
1. You Folks Look Wonderful From Here
2. Reaching For a Memory in the Fire
3. Why Make Life Harder Than It Is
4. The Evil That All Men Do

Produced and mastered by Tony Robinson at Wahalla Music.

As producer of The Serene Dominic Show, I’m pleased to know not only Serene the extroverted performer with a boatload of talent but also Serene the non-performer, the quiet, decent guy with painful insecurities who wouldn’t even consider naming this collection “Extended Play” because he thought that sounded too dirty. It’s this weird brand of second-guessing that has resulted in a musical career which can best be described as “What musical career?”
To expose him in the quickest and most exploitive manner possible, I contracted him to do an Internet show which begins with some news items to reflect his journalistic endeavors, includes a celebrity interview in the middle to and concludes with a music video that hopefully ties everything together and teaches YOU, the treasured viewer, an invaluable lesson. That last bit has yet to happen, but regardless we at Killing Time Productions, in conjunction with Bendi Records, are proud to present this “Extended Play”of new music written and recorded especially for The Serene Dominic Show show and performed by Serene Dominic and the Torchbearers

YOU FOLKS LOOK WONDERFUL FROM HERE
“There’s no better recruiting poster than a smile,” says Serene and he’s been buttering up his audiences for years with this opener, ironically the only song as of this writing not yet featured in a Serene Dominic episode. I have it on good authority the eventual accompanying video will feature Serene, a huge Von Trapp Family fan, being violated by little goat puppets. Really!!

REACHING FOR A MEMORY IN THE FIRE
Featured in vidcast2 and performed by Serene as The Human Torch, complete with a prosthetic flame on his left hand. Its title suggests someone who works up the courage to burn old photographs and love letters but then has second thoughts after the first crackle. The crackles on this recording, however, come courtesy of an old Arthur Lyman record.

WHY MAKE LIFE HARDER THAN IT IS
On October 6, 2007, Serene performed a 30 minute concert inside Peppersauce Cave, in Oracle, AZ and a live recording of this song was preserved in the very first Serene Dominic vidcast. Here, sans squeaking bats, is the studio version and you can hear just where Serene stuck a feather in his hat and called it Ennio Marconi. Sounds more like the McCloud theme if you ask me. What? Nobody asked me?

THE EVIL THAT ALL MEN DO
Featured in “Extreme” Vidcast 6, and performed by Serene in an Evil Knievel outfit while disrupting picnic playgrounds, mechanical bull demonstration booths and Scottsdale Bike Week. The video concludes with Serene jumping Water Retention Basin Number Seven with his stunt cycle. As to when Serene will jump the shark, Magic 8 Ball says, “Uuuh… NEVER!!!”
Eric Braverman, producer, The Serene Dominic Show

Watch every episode of The Serene Dominic Show exclusively at killingtimeproductions.com and serenedominic.com

Special thanks to Jamison Weddle (Stray Cat Studios, Chaton Studio), Otto D’Agnolo (Chaton Studios) and Michael Bolman (Conservatory of Recording Arts & Sciences) for their work in creating these original tracks. And a special thanks to Ray Benza and Mookie for their tireless work putting every Serene Dominic Show together.