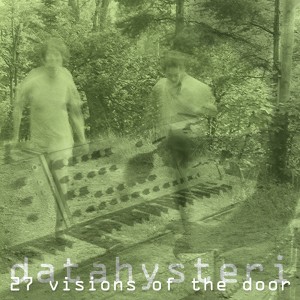 I’ve always fancied liner notes that gave away very little, if any, information about the product at hand. For instance those printed on the back cover of VHS release “The one armed avenger”: “An arm arrived through the mail… He immediately knows who sent the package. The revenge will be merciless – but one man still remains…” This poetic pièce de resistance I believe is one of the best. That the movie itself is below average in terms of quality is of little importance. Unfortunately I have to digress to tell you something about the boys behind this crazy little thing called Datahysteri.

Jonas Broberg and Martin Dunér both grew up in Sigtuna, a small community on the outskirts of Stockholm, and started making music together around 1979.

Sometime in the early 1980´s they decided to call themselves Datapanik (named after the Pere Ubu twelve-inch Datapanik in the Year Zero). A misspelling on a poster for an early gig led to a name change to Datahysteri. Lyrics about Indian Chiefs were not uncommon then, but they had better things in mind and moved towards a more electronic sound, influenced by legendary Swedish band Cosmic Overdose. (They became a huge influence on Datahysteri who often covered C.O. classic Moderna Dadaister live and even bought a few of their rhythm boxes!)

For my own part it took until the end of 1984 to finally meet the groovy two through a mutual friend. The first concert I attended was however somewhat of a letdown: lots of motionless staring into binders, tedious passages of silence between songs. Approximately the same titillation as viewing an erotic TV thriller featuring Bruce Boxleitner (in Thailand)! Luckily I soon got to know Jonas and found we had a lot in common. He baffled me with his rare combination of talking slowly in a comatose way while walking very rapidly at the same time. His enormous grasp of all things modular also flabbergasted me… This and a later meeting with Martin confirmed a cosmic splendour you just couldn’t help but to admire!

Then things turned quiet for a very long time concerning all things Datahysteri. Other perverse interests, such as work, family, cats and alcohol, took over. A few tryouts with new songs ended half finished, solo careers, and dabbling into so-called serious electro-acoustic music followed. Shouldn’t the day of retribution be here now, ye old 808 mongers? In these days of non-stop comebacks: Young Marble Giants, Sex Pistols, Led Zeppelin etc.: the time should be ripe for patching now! Find those binders, dust off those old analogue monsters, plug in that axe and croak a synthi squawk!

Lars Larsson 2008
– founding member of experimental group
En Halvkokt I Folie since 1982 and a general
nincompoop among other things. www.borft.com